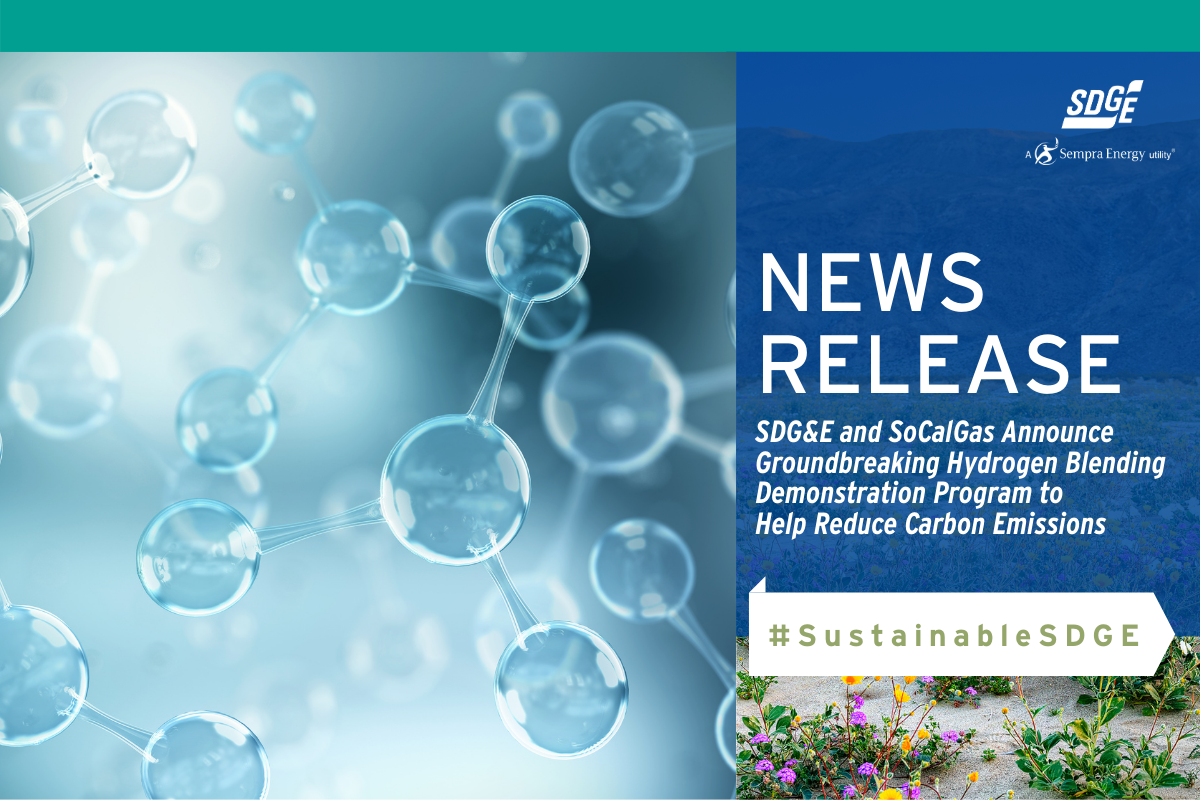 LOS ANGELES, Nov. 23, 2020 – As part of their commitment to support California’s climate goals and their mission to become the cleanest, safest and most innovative energy companies in America, Southern California Gas Co. (SoCalGas) and San Diego Gas and Electric (SDG&E) today announced the creation of a Hydrogen Blending Demonstration Program. This program would be the first in California and among the first in the nation.

Blending hydrogen with natural gas is part of a multi-pronged strategy both utilities – subsidiaries of Sempra Energy – are undertaking to decarbonize their natural gas grid. The vision is to leverage surplus renewable electricity generated in the middle of the day to produce green hydrogen, which then can be injected into the natural gas grid for storage and use. Power-to-gas technology is being developed to do just that. SoCalGas, in partnership with the National Fuel Cell Research Center, and the University of California Irvine, is leading the way in developing this technology, launching the first power-to-gas demonstration project in the United States in 2015. Hydrogen blending is another important milestone for providing the clean fuel needed to achieve California’s climate goals while maintaining an affordable, resilient and reliable energy system.

When adopted by the California Public Utilities Commission (CPUC), the demonstration program will provide an understanding of how to safely incorporate hydrogen, a zero-emission fuel, into the gas grid. This is the first step toward the establishment of a statewide hydrogen injection standard.

“This is the start of an exciting new chapter in the development of clean energy solutions that are critical in California’s fight against climate change,” said Estela de Llanos, SDG&E’s vice president of clean transportation, sustainability and chief environmental officer “Investments in hydrogen technologies – just like earlier investments in solar, wind and energy storage innovations – have the potential to create a new industry, new jobs and stimulate economic growth.”

“Green hydrogen is a game-changer, not only for our power and energy needs but also for our industrial and transportation sectors,” said Sen. Nancy Skinner (D-Berkeley). “And green hydrogen can support existing, good-paying jobs as our state and communities take steps to transition to a zero-carbon economy.”

“Today’s announcement is an exciting development for California’s emerging renewable hydrogen market,” said Bill Zobel, Executive Director of the California Hydrogen Business Council. “The Hydrogen Blending Demonstration Program will help the public understand that renewable hydrogen is important and a valuable tool for our carbon-neutral future.”

SoCalGas and SDG&E are planning multiple hydrogen blending projects throughout their respective service territories. The first proposed project will blend hydrogen into an isolated section of primarily polyethylene (PE) plastic distribution system in SoCalGas’ service territory. The initial hydrogen blend level is planned at 1% and may increase to as much as an industry-leading 20%.

SoCalGas expects to choose the location of the initial project in early 2021.

Subsequent projects are scheduled in SDG&E’s service territory and will build upon the knowledge learned in the first demonstration. This includes blending hydrogen into an isolated section of mixed plastic and steel natural gas distribution system, and an isolated steel pipeline demonstration.

In addition to these hydrogen blending projects, SDG&E announced in October that it intends to pilot two hydrogen projects by 2022 as part of its comprehensive sustainability strategy to advance carbon neutrality. These two projects would use a combination of technologies such as renewable resources, electrolysis and fuel cells to demonstrate increased system resiliency, long-duration storage, power-to-gas hydrogen fuel blending, and vehicle hydrogen fueling, among other applications.

SoCalGas is helping to build California’s 21st-century energy system with investments in hydrogen, renewable natural gas, fuel cells and carbon capture and storage. These innovations will help the utility decarbonize its pipeline system. Last year, SoCalGas set a goal to deliver 5% renewable natural gas (RNG), produced from organic waste to its core customers by 2022 and 20% by 2030. SoCalGas and SDG&E are also seeking CPUC approval of a program that will offer customers the option to purchase RNG as part of their natural gas service. The program is set to be voted on by the CPUC in December.

The Hydrogen Blending Demonstration Program is part of a joint application filed with the California Public Utilities Commission (CPUC) by SoCalGas, SDG&E, Pacific Gas and Electric (PG&E) and Southwest Gas in accordance with the Biomethane Order Instituting Rulemaking (Biomethane OIR). The filing can be found here.