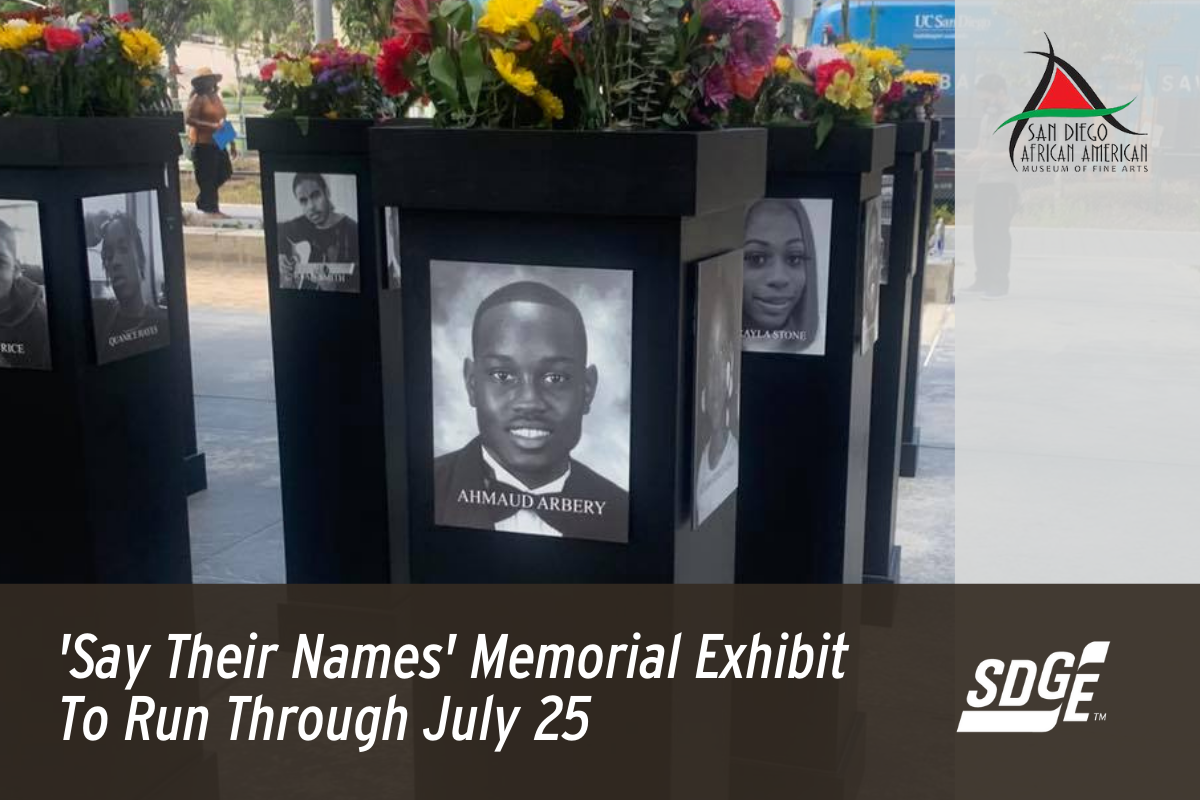 Outdoor Exhibit at New Children's Museum to honor those who can no longer speak.

For Gaidi Finnie, executive director of the San Diego African American Museum of Fine Art (SDAAMFA), honoring those who have endured injustice is a full-time, volunteer effort.

Since last September, he and the museum's board have been working hard to bring the “Say Their Names” Memorial Exhibit to San Diego. The exhibit, which has been traveling nationwide, opened on July 10 at the M.L. King Promenade near the New Children’s Museum (downtown San Diego).

Our CEO, Caroline Winn, joined Mayor Todd Gloria and other dignitaries for the recent ribbon-cutting ceremony.

“My heart is heavy with sadness as I stand here today, being reminded of the injustices that took the lives of those being honored by this exhibit,” Winn said. “While saddened, I am also lifted emotionally by the fact that I am standing here – with all of you – in a show of unity, as we honor the numerous Black lives cut short by injustices, and as we pay homage to local civil rights advocates who fueled our region’s push for a better, more just San Diego.”

"I am the daughter of a woman who was unjustly incarcerated in a Japanese internment camp during World War II, and I empathize with any and all San Diegans who have been subject to racist acts of any kind," Winn added. "There is no room for racism in our communities – and raising awareness through exhibits like this one is essential because it reminds us to never forget past failures, that we must continue our push for progress."

The memorial features 200 photographs of Black victims who lost their lives to racial injustice. These photos are printed on aluminum (weather resistant) and are displayed on individual pedestals.

Getting off the Ground

This grassroots exhibit got its start in Portland, Oregon, and is an outgrowth of the protests that took place nationwide in 2020. That informal outcry is now an organization called the "Say Their Names Memorial."

The organization's mission is to make sure that we never forget the victims and place a name with a face. And the San Diego exhibits also recognized local Civil Rights advocates who have worked to level the playing field.

"It should be clear that this is not a protest," said Finnie. "This is an honorarium to all of those we have lost, as well as those who continue to fight, for civil rights. "This is a teachable moment for all of us. We invite you to come, reflect and think about what you can do to make a difference."

Specific to San Diego, the exhibit honors the life of NFL linebacker Demetrius DuBose, who died on July 24, 1999, in a police-involved shooting. Additionally, 15 families were present to represent their loved ones, also victims of police violence in San Diego.

For the duration of this memorial exhibit, members of our Black Employees Business Resource Group will volunteer as ambassadors for the exhibit.

"Say Their Names" is open through July 25. Admission is free.