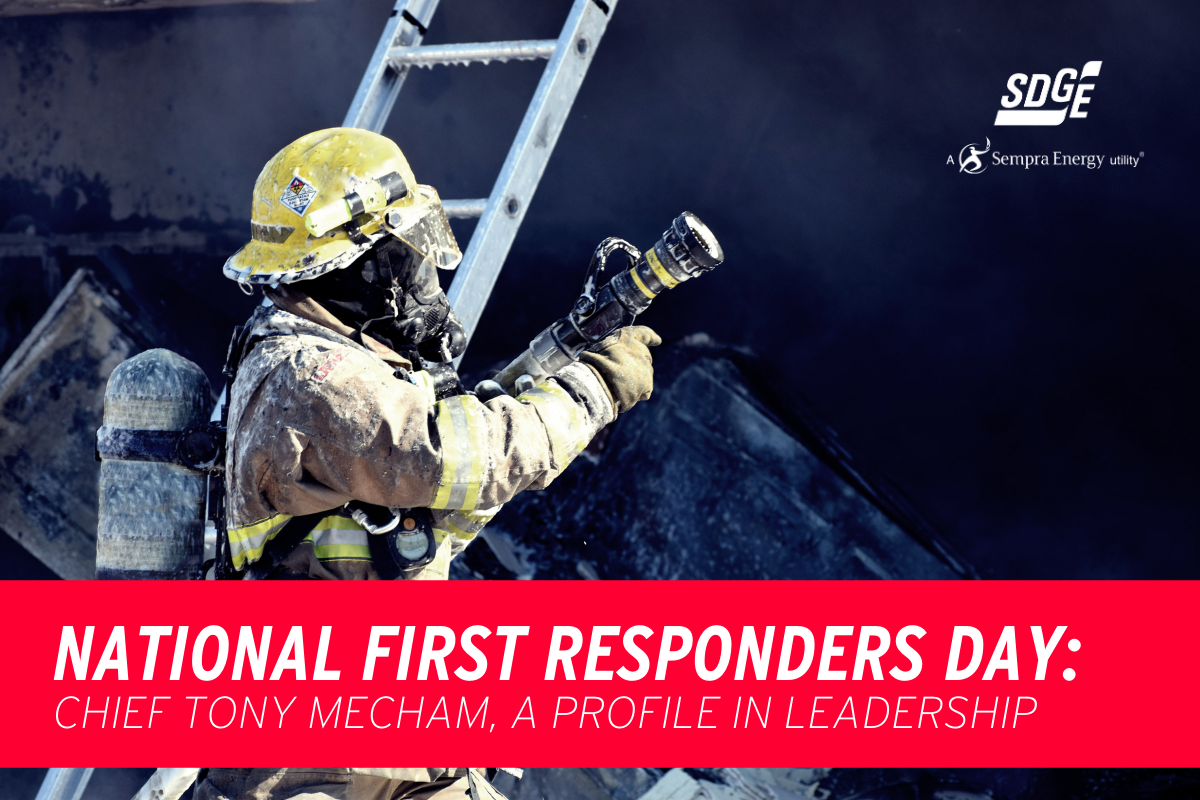 In recognition of National First Responders Day (Oct.28), we believe that it’s important to highlight the ongoing efforts of one of our integral partners, CAL FIRE. During uncertain times, and often in the face of very real danger, CAL FIRE first responders come to the defense of citizens of San Diego and the state. For their colossal efforts, they ask for little in return. Therefore, often a simple “thank you” can go a long way for these brave folks. So, to all first responders, we thank you for your selfless service!

To honor their sacrifice, we reached out to CAL FIRE Unit Chief Tony Mecham to discuss effective communication, how he came to work as a first responder and the unfortunate toll the job can take on those who serve.

How long have you served as a first responder? Where did you get your start?

I’m up to 33 years now. I started in Goleta, just outside Santa Barbara, with the U.S. Forest Service in high school -- just a summer, kind of ROP worker. And then that led me to the Fire Academy. I came to CAL FIRE in 1987.

Did you have any family members that served as firefighters?

No. My dad was a bookkeeper, but what's interesting, he loved the air tankers. And so, when I was a kid, we used to go down to the air tanker base and watch the air tankers reload, which is still common. So that's how I really think I got my love of it; probably as a five-or-six-year-old kid watching the old converted military airplanes reload and re-target at the Santa Barbara Airport.

What would you say you enjoy the most about this work? And what advice would you give to someone interested in a career as a first responder?

I'd tell them that it's the greatest job in the world -- every day is different. You wake up in the morning and you never know what the day is going to bring. Some days, it's budget hearings and personnel matters, and then other days, there are these large fires. And so, you know, no two days are the same. I like the challenge of ‘hey, whatever the day's going to throw at me, I'm going to accept, and we're going to conquer it with integrity.’ That's the part I enjoy the most.

What collaborative roles do SDG&E and CAL FIRE play in events like high fire risk conditions like we’ve been dealing with this week?

I think quite a bit. It really starts before the fire or the winds ever blow. We do a joint inspection program of all SDG&E power lines and equipment. The responsibility to enforce the public resources code on the clearance falls on us.

We also do quite a bit of work on pre-fire fuel treatment. This involves looking at where we can do fuel modification in and around the power lines. And, SDG&E is active with our fire-safe counsels.

Could you elaborate on the need for effective communication during events?

Well, I think that communication is key. One facet is looking at the public safety power shut-offs (PSPS), which will coincide with heightened fire danger. We want to get the message out about the heightened risk of fire, especially when the winds blow, urging people to be cautious. That goes in parallel with the utilities making their notifications.

And then, certainly, when a fire occurs, timely and accurate information is critical. Especially regarding evacuations handled by first responders, where we're setting up shelters, all of those types of things.

After you worked to combat the devastating Paradise Fire, you noticed that the first responders were experiencing symptoms of Post-Traumatic Stress Disorder (PTSD). Now, you want to bring this issue to light. How has this outreach work been for you?

I think what hit me is -- this used to be a fun summer job. And now our folks, they don't just go to forest fires anymore, they're going to community disasters, where entire communities are burned down. And lives are lost; it's becoming more frequent that we're out helping residents sift through the rubble. Those are all, in and of themselves, very emotional events. And then we bring that home; our folks aren't getting a chance to reset before it's off to the next series of fires.

Nobody's embarrassed when they twist their ankle at work, and we shouldn't be embarrassed when we recognize that maybe things aren't good at home, or you're becoming angry. It's part of this job, and I think we just need to do a better job at acknowledging while providing paths of treatment.

How can citizens thank first responders?

I think for firefighters, law enforcement and all first responders, it's just being respectful and an occasional “thank you.” And recognizing that they have a difficult job to do. They don't want anything, but (like anyone else) they want to feel appreciated; that the community appreciates the work that they're doing.

Do you believe that that is the case?

I do. We have really talented people that work for CAL FIRE, and they have to make hard decisions. They're doing the best thing they can for the community.

Thank you for all you do. We appreciate you taking the time to speak with us.