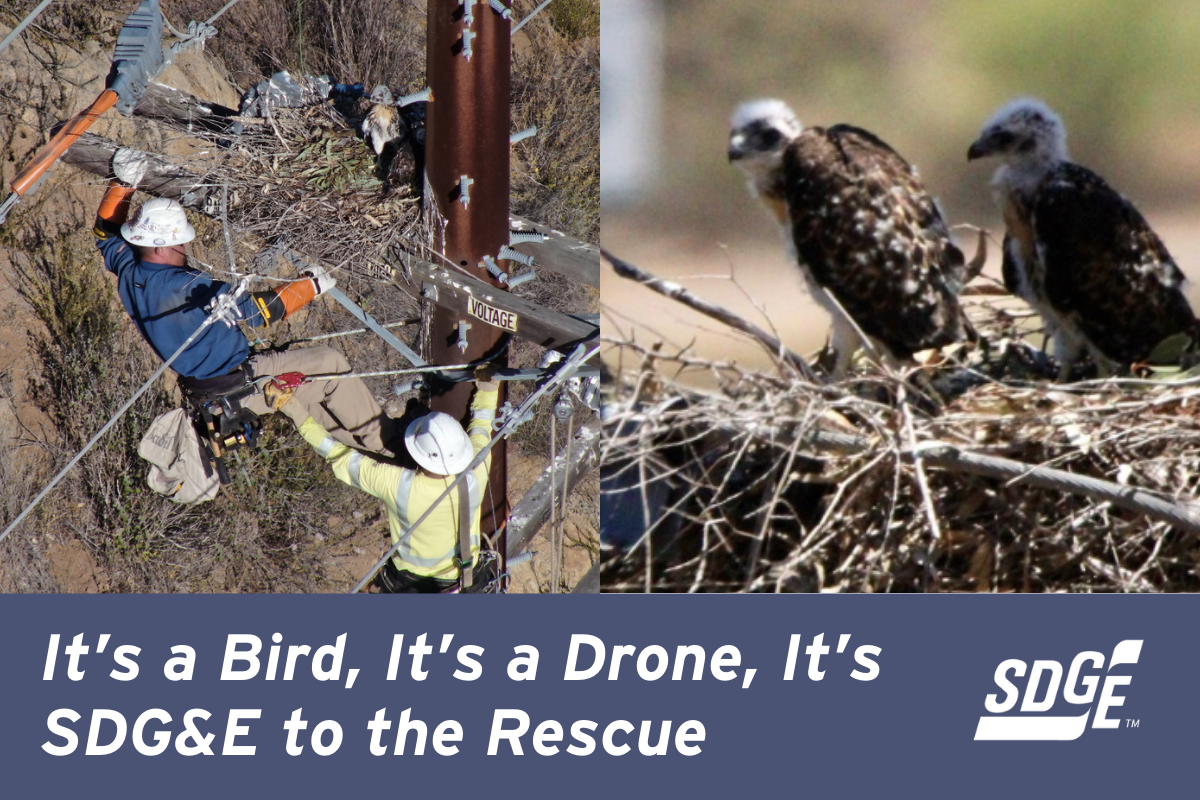 Did you know that we employ a team of biologists, and use technology like drones, to help keep birds and animals of all kinds safe from potential infrastructure-related incidents?

With our temperate climate, San Diego hosts a long breeding season for birds, starting in December for eagles and hawks and running through September for some of the smaller species. Throughout the year, company personnel are trained to keep an eye out for bird nests and exercise caution when trimming trees or operating around utility infrastructure.

Common birds sighted in our service territory include woodpeckers and other cavity-nesting birds (like bluebirds), who take up residence in wood poles, raptors in the inland areas, and a mix of smaller songbirds and large ospreys along the coast.

“Some birds come back to the same spot year after year for nesting," shared senior environmental specialist Julia Varnergardner. "In fact, Lake Murray is home to an osprey pair that returns annually to nest on one of our transmission towers. Several years ago, we installed a platform for the local celebrity to provide a safe space to nest away from the electrical lines."

During a recent inspection of one of our transmission poles, construction supervisor Tom Harrison discovered a family of Red-Tailed hawks comfortably nesting along the cross-arm of a steel pole. The large nest was occupied by two adults and their chicks. The normal course of action to remove and relocate the nest was not feasible due to the pole’s location and the age of the birds.

After careful evaluation, Harrison planned for his crew to climb the pole and install protective sleeves on the wires to keep both the nest and hawks safe. As two highly experienced linemen climbed the pole, another crew member monitored the situation with a drone to keep a close watch on the chicks and make sure the adult hawks didn’t attack to protect the nest.

This creative solution allowed the hawks to stay in the nest until the young chicks could fledge, protecting them from electrocution and ensuring the large nest would not spark a fire. When all the birds are no longer using the nest, the team will remove the vacant nest to discourage birds from nesting in that location again.

“The work was potentially dangerous as hawks are naturally protective of their young and there was potential for the adults to attack the workers as they installed safety measures,” explained senior environmental specialist Angelique Hartman, who coordinated the rescue. “We planned for all types of contingencies. Thankfully everything went well and the birds are now protected and safe until they are ready to leave the nest.”

Recently, our company made the news for helping protect a great horned owl nest after one of the young owls (referred to as an owlet) was, unfortunately, electrocuted by the nearby distribution line. After receiving a call for help from Avian Behavior International, the Northeast District team quickly took action, visiting the nest location in Escondido to assess the next steps.

As part of our Wildfire Mitigation Plan, the installation of covered conductors was originally designed to provide additional protection against wildfire ignitions, but they have the added benefit of eliminating the risk of electrocution to birds. Other examples of our grid hardening efforts benefitting wildlife include the company’s work on undergrounding distribution lines in high-fire threat districts, which helps to reduce fatal interactions between wildlife and SDG&E facilities.

In addition to foot patrols, we also employ drones to inspect poles. These drone flights have helped to spot active nests on poles that may need to be relocated or removed due to the risk they pose for igniting fires. All work crews have the authority to stop a job if they see a nest or bird in danger.

Given the company’s success in protecting birds, we have taken an active role in Edison Electric Institute’s Avian Power Line Interaction Committee, a group that convenes utilities to share best practices on effective mitigation strategies to ensure birds are safe around utility infrastructure.

We are currently working with the U.S. Fish and Wildlife Service (USFWS) on the development of an Eagle Conservation Plan. When approved later this year, SDG&E will become the first investor-owned utility to be issued a permit under the Bald and Golden Eagle Protection Act.

The approved and permitted plan will allow us to work within certain proximities of known eagle nests, when necessary, with protection measures agreed to by our company and the USFWS.