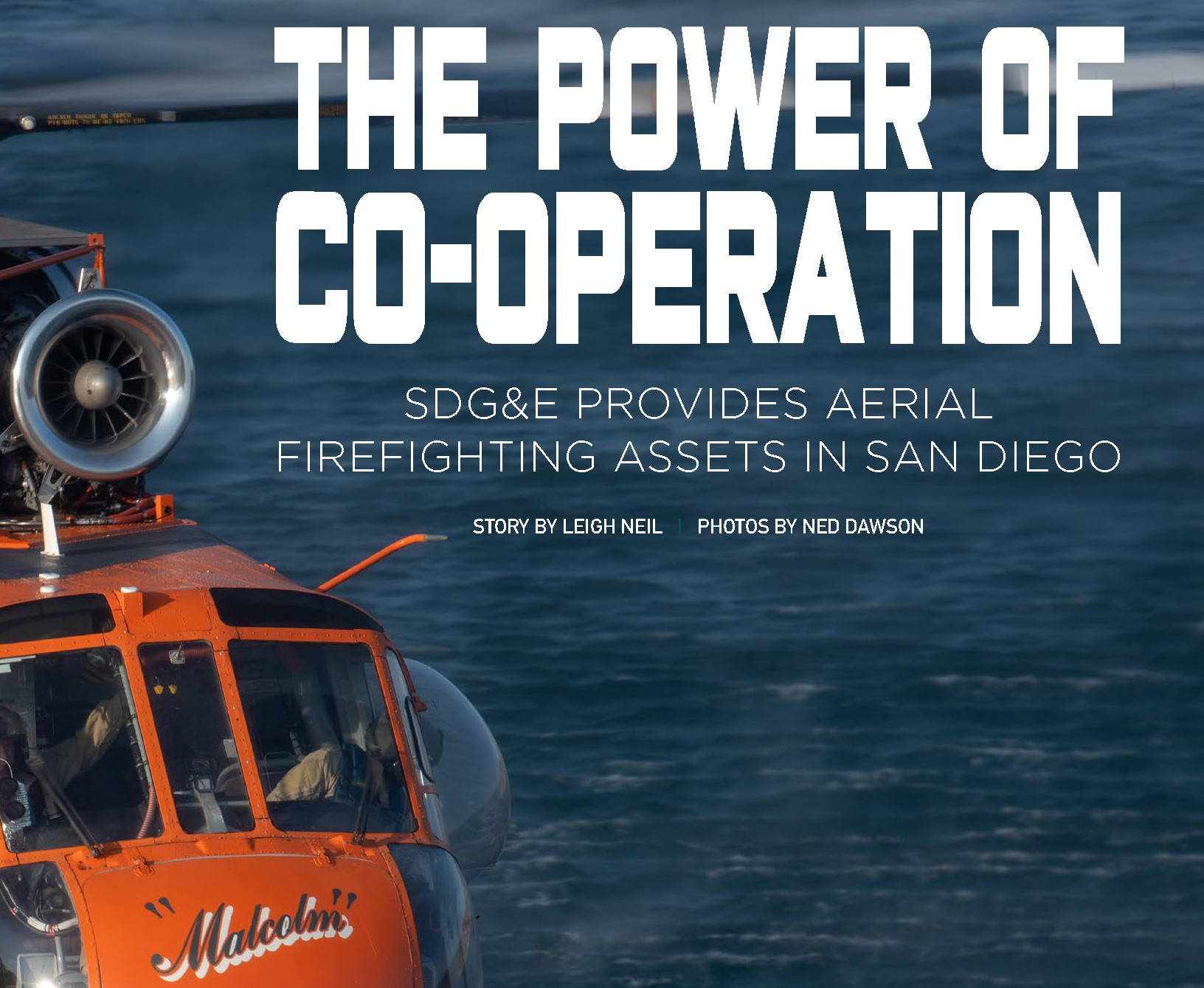 Editor’s Note: HeliOps recently spotlighted SDG&E’s aerial firefighting capabilities in its AirAttack issue. SkyMaverick, an Aircrane contracted by SDG&E to be stationed in our region year-round to protect our communities, was profiled in the publication, along with our aviation staff and another helicopter also used for firefighting and other functions. You can follow SkyMaverick on Twitter at SkyMaverickSDGE. The article, downloadable via this link, is republished here with permission from HeliOps. Look for it starting on page 65.

Every little can compete with the Erickson S64 Aircrane when it comes to its capability to quash wildfires. The massive helicopter can carry up to 2,650 gallons of water or retardant and deliver it with pinpoint accuracy. Since late 2009, SDG&E has made the Aircrane available in the San Diego County area for the three to four month fire season every year. As prevailing climate conditions have changed over the last decade or more, it is now widely accepted in California that the fire season has become a permanent, year-round condition and this is evidenced by the fact that by the beginning of August 2018 – traditionally at the start of the fire season – the Aircrane had already made 217 airdrops over fires. In response to that change in the fire season, SDG&E has contracted with San Diego County to make the Aircrane available for the full year, with the contract currently with options extending out to 2022.

The giant helicopter is not owned by SDG&E but leased from Erickson Incorporated, an Oregon company that bought the intellectual rights to the (then) Sikorsky S64 in 1992 and assumed responsibility as the aircraft’s manufacturer and type certificate holder. It was Erickson that originally V developed and built the 2,650-gallon fire suppression system that has made the S64 such a uniquely capable heavy firebomber. The Aircrane can use either fresh or salt-water and fill in flight from a range of sources, using a snorkel system that fills the tank in no more than 45 seconds, while accuracy and effectiveness are optimized on the Aircrane’s delivery system, with the  huge tank incorporating a dedicated built-in GPS unit, which automatically reads groundspeed and accordingly adjusts the amount of water or  retardant that is applied. It is a requirement that the US Forest Service approve all firefighting pilots and all Erickson pilots flying the San Diego Aircrane meet that requirement by holding Cal Fire certification.

Under the terms of the SDG&E Aircrane lease, Erickson provides all operational crewing, maintenance and support, seven days a week for the whole year and the massive machine is based at Gillespie Field at El Cajon. SDG&E picks up the tab for the Aircrane’s fixed deployment costs and the first two hours of flight time on any fire suppression mission, with the next two hours paid for by San Diego County. “We want a type-1, kick-ass asset down here that’ll drop a lot of water and drop it when we need it,” remarked Tom Fries, who is in charge of SDG&E’s aviation unit.

The Aircrane is not the only helicopter that SDG&E makes available to firefighting services, as the company recently purchased a brand new Airbus H145 for use on various utility missions within the power and gas company’s operation and also make this machine available as a type-2 light helicopter for firefighting duties. The H145 is an extremely advanced, new-technology, high-performance platform and is the only H145 certified with Cal Fire for use on firefighting operations. The SDG&E example boasts a multi-sensor turret, which includes high-resolution video, stills, infrared and ultra-violet cameras. Of particular relevance to the H145’s use in the air-attack role is the infrared capability, which can be utilized for fire-line mapping and to locate and identify hotspots and heat sources. Adding further to the usefulness of the H145 is a radio-based ‘mesh’ downlink system currently under development, which will be compatible with other first responders own forthcoming systems and permit the aircraft to transmit realtime imagery to firefighting operations controllers, greatly increasing both firefighting effectiveness and firefighter safety. For firefighting, the H145 has a transportable 180-gallon Bambi bucket and pumpkin set-up, but its usefulness as a water delivery system is greatly overshadowed by its capabilities as an oversight and information platform. SDG&E’s Jesse Thrush sums up the H145’s suitability for the firefighting role eloquently. “It’s an amazing aircraft, and there’s no other machine in San Diego County – fixed wing or not - that can do what it will be able to, shooting realtime information down from overhead the fire.”

The combination of the S64 Aircrane and Airbus H145 on a permanently available basis makes for a dramatic increase in firefighting capability in the San Diego/Southern California area, and one that would quite probably be out of the financial reach of firefighting agencies without the cost being borne by SDG&E. As Tom Fries remarked though, “Almost all of us who are residents in San Diego County have a vested interest in the most effective and rapid extinguishing of wildfires. We are also electricity customers and we therefore benefit from the concomitant protection of electricity infrastructure assets. Of course, protection of life and property come first, but everywhere there are built-up areas or virtually any residential property, there are power distribution lines and towers.” He added that there is an ongoing policy of network-wide replacement of all wooden poles with steel, specifically to reduce fire risk and increase fire resistance throughout the electricity network. The situation with SDG&E and San Diego County is very much a case where corporate acceptance of civic responsibility results in a benefit to all parties concerned. 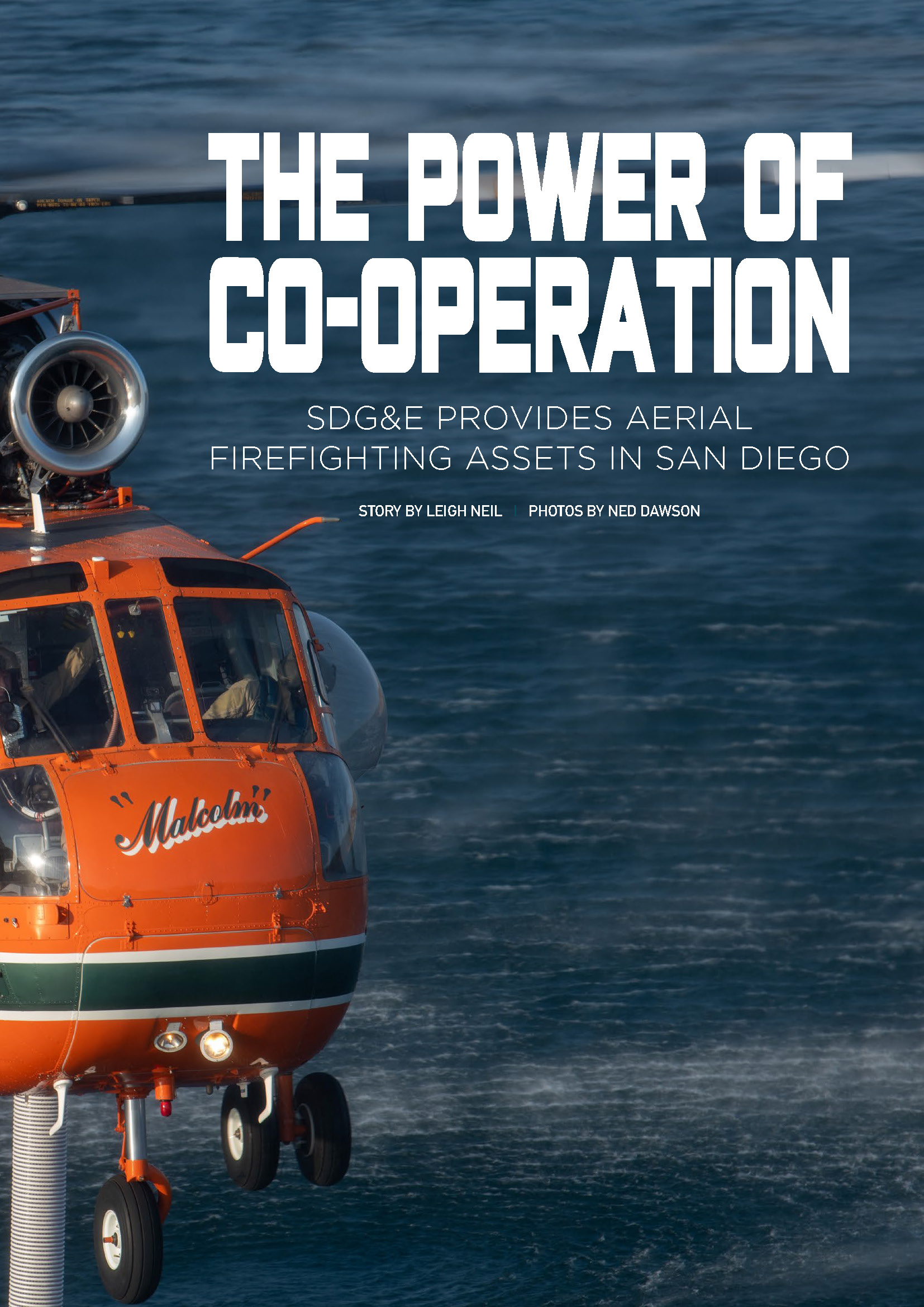