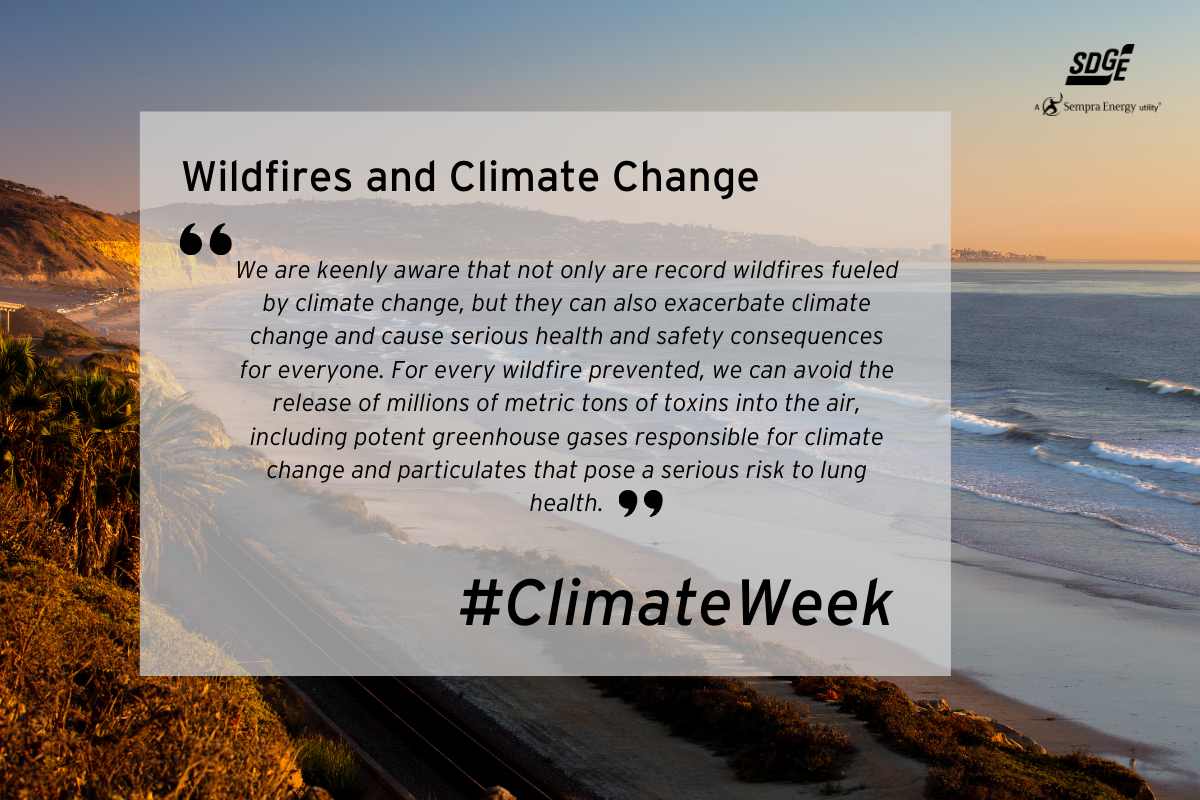 Editor’s Note: Climate Week NYC 2020 kicked off in New York on Monday, Sept. 21, alongside the annual General Assembly of the United Nations, bringing together business, government and civic leaders from around the world to showcase climate action. In recognition of Climate Week, we are taking time this week to reflect on the role our company plays – and the energy industry plays – in building a clean energy economy that is also just and equitable. In the coming days, we will publish a series of articles exploring climate action and connections across multiple areas and explain what progress we have made in each of those areas. Along the way, we will also provide resources for our customers and readers to enable them to make a difference in their daily lives.

Among scientists, there is a general consensus that climate change, which creates drier, hotter and wetter conditions, is one of the key factors driving the growing intensity and frequency of wildfires across the West.

SDG&E has long recognized the connection between climate change and wildfires. Noticing that fire weather conditions in 2007 were very different than in the past, our company began to establish what would become recognized as an industry-leading wildfire safety and mitigation program. Since 2007, our company has invested more than $2 billion to harden the grid, as well as pioneering weather and fire prediction models and enhancing regional emergency preparedness and response. Every year, we make advancements in this area to increase our region’s resiliency.

We are keenly aware that not only are record wildfires fueled by climate change, but also the fact that wildfires can exacerbate climate change and cause serious health and safety consequences for everyone, especially disadvantaged communities.

For every wildfire prevented, we can avoid the release of millions of metric tons of toxins into the air, including potent greenhouse gases responsible for climate change and particulates that pose a serious risk to lung health.

“Smoke from wildfires contains volatile and semi-volatile organic compounds and nitrogen oxides that form ozone and organic particulates and other toxic pollutants – all of which can be dangerous and even deadly for sensitive populations. Wildfires also impact climate change because they emit massive amounts of carbon dioxide and other pollutants that can affect regional and even global climate,” according to Yale Climate Connections. Additionally, wildfires increase the risk of mudslides, as burned areas drenched with rain can become unstable.

Recent wildfires made the air dangerous to breathe in many parts of California – at a time when respiratory concerns are already elevated due to the COVID-19 pandemic. The massive amounts of black carbon released by wildfires also make it more challenging for California to meet its climate action goals, as they can offset the success that state has had in reducing emissions by embracing renewable energy and electric vehicles.

Year to date, fires in California have already produced 90 million metric tons of carbon dioxide, about three times the amount generated from providing power to the entire state, according to The Washington Post.

Learn More Everyone has a role to play in preventing wildfires. Nearly 85 percent of wildland fires are caused by human actions, such as campfires left unattended, discarded cigarettes and use of equipment, according to the National Park Service. You can help prevent wildfires by following these safety tips provided by Smokey Bear.